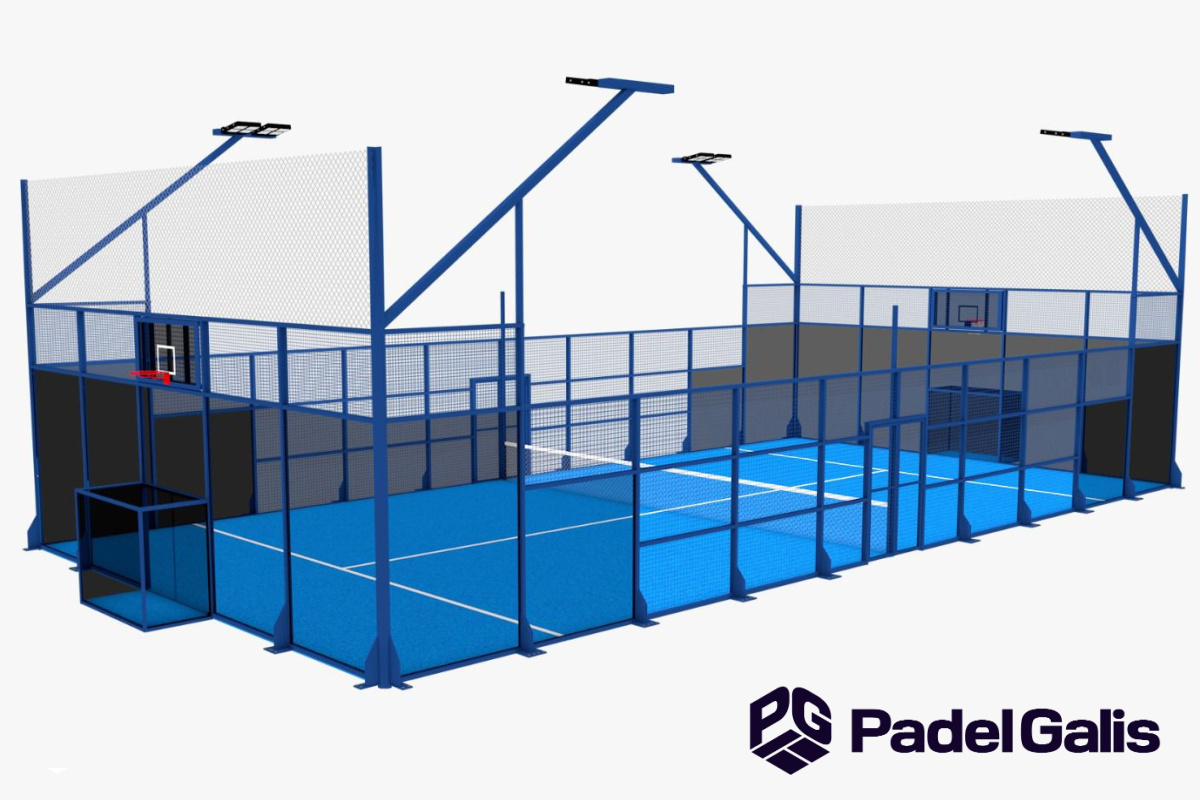 Padel Galis’s patented Multisports court allows for the playing of padel tennis, basketball, indoor football, hockey, beach volley, beach tennis and badminton. Since its inception, Padel Galis’s new 7-in-1 court has had the backing of the World Padel Tour, which, as part of its commitment to the expansion of padel tennis, has adopted it as its ‘third court,’ behind the WPT Special Edition and Challenger models.

World leader in the manufacture of padel tennis courts, Padel Galis launched to market in July 2021 a padel court which could also accommodate the playing of six further sports. Basketball, indoor football, hockey, beach volley, beach tennis, badminton and padel all share an officially approved 20x10m court. All part of a revolutionary ‘7-in-1’ package.

Production of the Multisports court, designed and patented by Padel Galis, had the full support of the World Padel Tour. Indeed, the court has been commercialised since the start of 2022 as the third official court of the professional padel circuit, of which the Valencian company has been both technical sponsor and official court since 2020, and for which it already builds and installs two courts: the WPT Special Edition and the WPT Challenger.

“World Padel Tour immediately recognised the new court’s potential. They confirmed that padel is the main sport that will be played on it, but that it is also highly adaptable to other sports besides,” commented Padel Galis CEO, Francisco Pérez Galisteo. “What’s more, being a patented court they were happily in favour of using this product as the third court of the World Padel Tour,” affirmed Pérez Galisteo. “Here at Padel Galis we are delighted to be able to continue to support the growth and development of padel as a sport in partnership with the professional world circuit.”

The innovative new ‘7-in1’ court from Padel Galis can be transformed in just 30 seconds. By turning in the basketball nets (stored facing outwards), opening the football gates (covered over when not in use), or raising/ lowering the central net to standardised heights (adjusted with automatic control via a purpose-built app), the court is easily adjusted to the chosen sport.

“When players arrive at our Multisports court, they will find the access doors closed,” explained the Padel Galis chief executive. “Via the application, they choose the sport they wish to play, and the court transforms according to their selection. In no more than 30 seconds, the access doors are opened.”

Designed to be a permanent installation, the Padel Galis patented Multisports court requires a minimum available surface area of 23x11m, although the internal play area corresponds to that of an official 20x10m padel court. The flooring is the same as that used in the WPT Special Edition, and comprises a compact turf employed in both padel tennis and field hockey. It offers a consistent rebound, making it also ideal for both football and basketball.

Padel Galis offers full colour customisation of both the Multisports court’s external structure and turf. These features combine to guarantee not only the aesthetic appeal of the installation but also its resistance to general wear and tear due to the weather.

Padel Galis’s new patented Multisports court was officially presented to the public as part of the Master Final of the World Padel Tour, held from 16-19 December 2021 in Madrid. It was then available to pre-order from January 2022, enabling those interested to request further information and reserve in advance. The first phase of the project’s roll-out saw Padel Galis make 100 units available for purchase.

Padel Galis has installed over 8,000 padel tennis courts worldwide since 2016. Fans of this racket sport play on courts built by the Valencian firm in over 50 countries worldwide, particularly in Spain, Italy, Sweden, the United Arab Emirates and Mexico, with the latter home also to the South American branch of the company.

Its catalogue of services notably includes the design, manufacture and installation of ‘turnkey’ padel courts, including any civil engineering necessary, maintenance and repairs. Five models of court are available: the official WPT Special Edition, WPT Challenger and Wilson Elite courts, and the Ultrapanoramic Mundial and Pro One courts.